After a brief slumber—Pele is back—and lighting up the night skies over Kīlauea once again.

On a warm and otherwise uneventful day, somewhere around 300,000 years ago, our modern ancestors (Homo sapiens) took their first mysterious steps across a violent and shifting landscape. Little is known as to how or why these prolific progenitors exploded across the globe. But they would inevitably shape a new world. Far away, across oceans, that world was also taking its own shape as the rumblings of another epoch and equally mysterious origin story burst cataclysmically from the very heart of our beating fiery planet. The ancient Hawaiians would name this place Kīlauea, the fiery home to one of their most revered and omnipresent Hawaiian Gods: Pele—creator of new lands and destroyer of old ones.

Perhaps it is no coincidence that Pele would make Kīlauea her home, as many stages of its developments coincided with our ancestors. As humans took our first steps, Kīlauea laid its first alkali-basalt lava flows thousands of feet deep below the ocean’s tumultuous surface. And while humans were building their modern footings upon two million years of  evolution, Kīlauea was birthing atop the foundations of an 81-million-year-old process that would transform the Hawaiian–Emperor seamount chain into the Islands we cherish today.

From this spirited birth below the ocean, Kīlauea would transition over 150,000 years from a pre-shield volcano, characterized by infrequent low volume eruptions that were quickly cooled by the surrounding cold seawater, to the characteristic explosive shield-type volcano that dominates the Hawaiian archipelago and are responsible for the effusive lava flows contributing to most of the Island chain’s mass. And just as humans began to utter their first words, some 50,000-150,000 years ago, Kīlauea broke free of its watery bonds, and loudly erupted upon the surface to join in the conversation. Up and up, it would grow over thousands of years, but Pele shrouded her future home in glowing secrets. Much of Kīlauea’s shield-building phase is poorly known as only 10% of Kīlauea’s surface rocks are older than 1000 years, leaving scientists a mystery cloaked in fiery calderas and molten rock, a realm no human can pass through.

It’s only in the more recent past, 2500 years or so, that clues remain to study the formation of this volcanic island maker. Like the many legends of Pele’s countless lovers, infidelities, feuds, and heated retributions, Kīlauea’s past has been pieced together from the cycles of explosive tephra-dominated (ash and rock ejected from the volcano) and effusive-dominated (lava flow) periods recorded in deposits upon its slopes. Scientists have discovered that for 60% of that time a caldera, often thousands of feet deep with magma, has existed in the summit. This caldera helps create a cycle of explosive and effusive periods. As magma fills the caldera, lava flows from the summit and rift zone vents. When the magma supply slows, the caldera collapses, sometimes thousands of feet inside the volcano to the ground water level. If this ground water then enters the magma chambers and vents, it will trigger an immense explosive period. A previous major explosive period lasted for over 1200 years, launching rocks the size of small dogs up to three miles, and baseball-sized rocks up to 12 miles, only ending with a gushing phase some 1000 years ago. 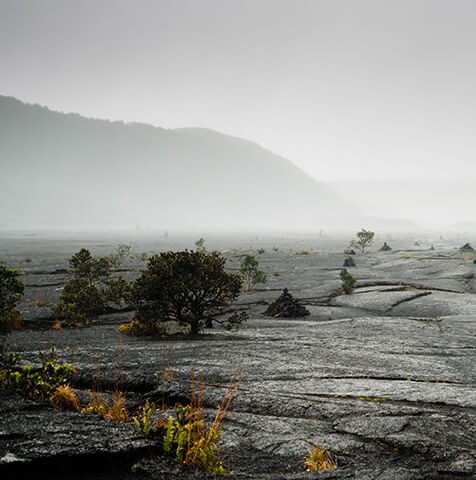 “The ancient Hawaiians would name this place Kīlauea, the fiery home to one of their most revered and omnipresent Hawaiian Gods:
Pele—creator of new lands and destroyer of old ones.”

Since then, various cycles of eruption have occurred. This period included the formation of the present day Kīlauea caldera following the 60-year ‘Ailā‘au lava flow, spilling out over the summit to the coast on the north side of the East Rift Zone. The ‘Ailā‘au flow began in 1400 CE and is the longest continuous flow witnessed by people in Hawai‘i. Its end ushered in 300 years of explosive eruptions when the caldera collapsed upon itself, as magma supplies slowed, and the caldera floor dropped thousands of feet, equal to 1.5 cubic miles, yes miles, of reduced volume. This explosive period ended in the early 19th century, but accounts for some of the most legendary modern descriptions and unbelievable recorded history including 2000-ft lava fountains, eruptions reaching the jet stream, pyroclastic surges miles down its flanks, and blankets of 35-ft thick deposits covering the summit in an instant.

Until finally, a relatively mild effusive period beginning about 200 years ago began slowly filling the summit caldera with magma once again. And by mild, that still includes immense lava flows, lava fountains, and the occasional unpredictable explosive blips. The last major blip occurred in 1924, when the lava lake in the Halema‘uma‘u Crater on the floor of Kīlauea’s summit caldera suddenly drained hurtling ash, dust, and rocks for 17 days, some car sized, as far as half a mile from the crater. So, while this relatively “calm” period will last for some time, eventually Pele will explode in renewed fury and likely remain that way for a long, long time.

What we are left with is an incredible landscape full of spectacular formations, flora, and fauna born from cataclysm. Throughout Hawai‘i Volcanoes National Park, there are a multitude of geologic creations marking the violent pressures and releases as the earth’s crust battles to begin anew. Two of my favorites are the Kīlauea Iki hike and Thurston Lava Tube. It is almost a rite of passage to begin with the Thurston Lava Tube, known locally as Nāhuku Lava Tube. After a short walk through a tree fern forest teeming with local bird species and colorful ‘ōhi‘a trees, you will arrive at a glowing entrance to an underground hideaway. Since lava hasn’t flown through this tube in hundreds of years, you can walk through it and imagine at that very moment tubes exactly like it are carrying streams of subterranean flows from the Pu’u O’o crater to the ocean. Beyond the sense of mystery and connection one feels walking through arteries that once carried the very life blood of the Hawaiian Islands, you can marvel at the unique geologic features and hidden creatures that have also helped redefine our understanding of biologic and evolutionary science.

Once you emerge from the shadowy depths of Thurston, head to one of the best hikes in Volcanoes National Park on the southern part of the island—the Kīlauea Iki trail. This hike is easily accessible from the Crater Rim Drive, and trail maps with information can be found at the visitors’ center in the park. Where else on earth can you walk through the crater of a volcanic eruption—the most violent recorded eruption Hawai‘i has ever seen? The four-mile (two to three hours) loop trail begins atop the Kīlauea Iki crater rim and descends steeply through rainforest teeming with tropical flora and fauna. Reaching the dried lava lake on the crater floor, you begin your path across the barren black rock, which before it cooled was a 400-ft deep lake of molten lava. The spectacular 1900-foot high fountain eruption in 1959 added 86 million tons of Madame Pele’s ferocity to the lava lake. It took over 30 years for the lava lake to completely solidify, yet it feels like you could still fall through! Near the eastern edge of the crater, it is still possible to find the deep drill holes scientists bored to assess the underground lava but be careful as super-heated steam still rises through them. Scattered across the crater floor, young ‘ōhi‘a trees, generally the first plant to colonize lava flows, stand out with their beautiful red blossoms. This is a phenomenal hike that blends the isolated prehistoric feel of walking across a barren volcanic crater with the vibrant lush embrace of the crater rim rainforest.

It would take entire books to describe the many unique experiences, creatures, geologic processes, and beautiful sites scattered across Kīlauea’s slopes. But the best place to start is the visitor center at Hawai‘i Volcanoes National Park. It is a gateway to an otherworldly realm found nowhere else on earth. Discover the earth before it became earth and watch it do so before your eyes. Like the many inhabitants of old, you can feel Pele’s mana (spiritual power) as she gives and takes of the land. This ancient process of fiery rock meeting water will linger in the imagination and enlighten you to the violent beginnings and continual renewal of the Island of Hawai‘i. And just as humans were birthed alongside Kīlauea, perhaps it will awaken and enlighten a shared connection to the land and the people deep inside your own fiery depths.