Carved in Culture and History

When the ancient Polynesians packed their canoes in preparation for their long journey of discovery, they included an array of fruits and vegetables to not only nourish their bodies, but also to heal themselves as necessary during their long voyage. To this day, locals use these carefully selected “canoe plants” to not only restore their health, but to prevent disease and illnesses, passing along the critical knowledge the Polynesians carried with them.

Known as a “cure-all” to the native Hawaiians, the fruit, bark, leaves, and juice of the noni plant is held in the highest esteem for its multiple uses in health and healing. In ancient times, the fermented juice of the noni fruit was drunk as a regular tonic to maintain health. In addition to a health boost, the unripen version of the noni fruit was said to have been served to women nursing infants to encourage lactation, though today a physician should be consulted if pregnant or nursing before consuming.

Along with ingestion, the ancient Hawaiians also applied the juice from the pungent noni fruit topically to cure many ailments from arthritis to headaches, while large chunks of the noni flesh were said to have been put into deep wounds to encourage healing and inhibit infections.

Today, noni fruit, also known as cheese fruit, and juice can be found in some stores and farmers markets while other companies have utilized the noni plant in many ventures including fruit leathers, powdered pills, and dried leaf tea. Keep an eye peeled for the plant growing roadside.

Across cultures, salt has served not only as a highly prized flavor additive, but also as a sacred part of society with abilities to purify and cleanse our bodies and spaces. In ancient Hawaiian culture, ‘alaea salt was created by harnessing seawater from deep underground wells and transferring the water to holding pools of packed earth where the water was allowed to sit and concentrate. This concentrated seawater was then transferred to shallow ponds where the top salt was raked off, rinsed, and dried before being mixed with volcanic clay rich in iron oxide. This valuable commodity contained trace minerals including potassium and magnesium, which were important to maintain both electrolytes and blood pressure. ‘Alaea salt was also added to water and used in many purification ceremonies including the blessing of new homes, canoes and temples.

At the time of the ancient Hawaiians, many households created their own salt, but today, finding traditionally made ‘alaea salt can be very difficult. 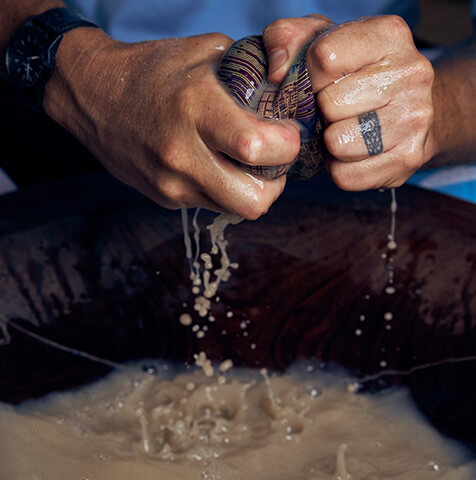 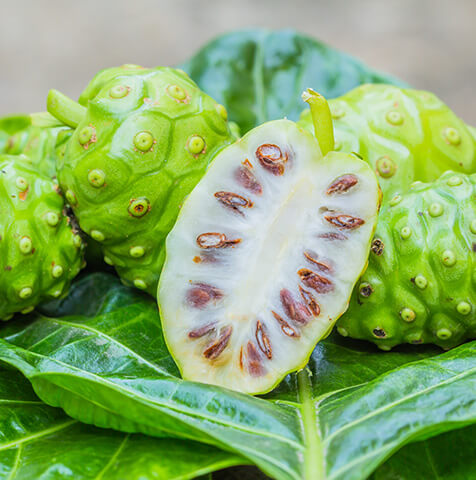 “Known as a “cure-all” to the native Hawaiians, the fruit, bark, leaves, and juice of the noni plant is held in the highest esteem for its multiple uses in health and healing.”

Known in ancient times for the tremendous amount of mana (spiritual energy or power), ‘olena, which means yellow,  is a humble root with many medicinal uses for the Hawaiian people. This perennial herb, growing only about 3-feet in height, is a member of the ginger family whose dark yellow “roots” were known for their antibacterial and anti-inflammatory properties.

As a raw supplement, grated ‘olena root could be taken for its anti-inflammatory benefits. The fragrant root could be grated and squeezed to extract the juice, which was used to soothe ear infections in keiki (children). Or, if drank as a diluted juice, the ‘olena extract could be used as a general health tonic known to combat consumption, asthma, and congestion in the body.

Today, the ‘olena plant can be found across the state except for the island of Kaho‘olawe, but rarely found in the wild except for the moist, forested valleys. In recent times, ‘olena root can be found in many health food stores in its natural form or also in powdered capsules or pill form.

Native to the Western Pacific islands, ‘awa was known across the Pacific as a plant utilized for its many benefits including to serve as a cure for colds, headaches, and anxiety.  The ‘awa plant, scientifically known as Piper methysticum or “intoxicating pepper,” was prized for its roots that grew soft and thick. The root was traditionally chewed and spit into a ceremonial bowl to be mixed with coconut water or spring water. The mixture sat before being stirred and strained through hibiscus bark, and was typically warmed up using hot stones before being allowed to cool down to drink.

As a drink, ‘awa could be enjoyed socially for its sedating, muscle-relaxing effects that were known to cause euphoria, but no feelings of hangover the following morning. The drink could be also taken to combat stress, anxiety, insomnia as well as alleviate the pains of urinary tract infections and menstrual discomfort.

‘Awa is still a vital part of many societies across the Pacific enjoyed as a social drink and as a medicine with many ‘awa bars popping up in cities.  Along with enjoying ‘awa as a drink, it can also be consumed as an additive to some commercially-made drinks or in capsule form as a health supplement.

Grown throughout the islands, the kukui tree had many important purposes in ancient Hawaiian society, so much so that it was named as Hawai‘i’s state tree in 1959. Growing to a whopping 49 to 82 feet in height, this member of the spurge family features wide branches, pale green leaves, and nuts approximately 2 inches in diameter. The dark outer shell was often utilized as ink in traditional tattoo practices, while the inner kernel found within the hard shells were burned in shell lamps or ti leaf torches often tended to by the children in a family. This same kernel was also pressed to extract the rich oil that has been proven to be rich in alpha-linoleic and fatty acids and used as a topical ointment massaged into weary muscles or applied to soothe burns or chapped skin. This same kernel could be mashed and ingested to serve as a powerful laxative.

Today, kukui nut oil can be found at local health stores in extract form to be used as skin serums popular with many locals. The mainstream cosmetic industry has also caught onto the beauty benefits of kukui nut oil and this powerful skin aid can be found mixed into many beauty products from body lotions to face masks. Roasted kukui nuts mashed with salt, also known as ‘inamona, can be found in stores and online used in dishes as a topper or additive to the local staple, poke.  There are definitely some great options to get your fix of poke on Hawai‘i Island.  While in Kona, check out Umeke's Fish Market Bar & Grill or Pau Hana Poke.

The knowledge the Polynesians carried with them on their canoes as they embarked on their journey to the Hawaiian Islands has proved itself against time to heal and nourish the mind and body for generations. As with any natural remedies or supplements, do careful research and make sure to talk to health experts before trying for yourself.