As humpback whale season comes to an end this year, we’ll look seaward towards the endless Pacific and strain to glimpse one last fleeting breach of any remaining humpbacks as they leave for their summer feeding grounds. We say goodbye and wait for their return, but we must remember below the waves, the waters around these islands are home to a much wider variety of our mammalian relatives who are just as important and amazing as the mighty, melodious humpbacks.

Of course, it’s easy to see why humpbacks cause such a splash, both in and out of the water, as they are unavoidably the most easily seen and experienced of all the whales that migrate to Hawai‘i. In fact, each year over 10,000 humpbacks journey to the warm safety of the island to give birth, calf, and mate. Starting around November and lasting until April, the Pacific humpbacks leave their summer feeding grounds in the cold nutrient rich waters off Alaska. Their journey is one of the great migration routes of any creature to have lived on this small blue planet. With only their instinct to safeguard and spread new life, they cross a treacherous sea route of killer whales, net entanglements, pollution, and vessel strikes.  Incredibly, through all  these hazards, the Pacific humpbacks, regardless of where they migrate (Central America, Asia, or Hawai‘i), all sing the same constantly evolving melodic language 3,000 miles later, if all goes well for the Hawaiian humpbacks, they arrive in the beautiful waters we have all come to know and love.

What is even more amazing, humpbacks pack their own lunch. The clear tropical waters around Hawai‘i are a food desert for them. It’s easy to assume they are full of an incredible array of life, as the nearshore coral reefs support a multitude of astounding creatures and food webs. And though this is true and a testament to the incredible abilities of corals to sustain whole ecosystems, the reefs are truly an oasis in what is otherwise an ocean desert. And humpbacks, weighing up to 90,000 lbs., simply can’t get too close to the reefs as they could easily run aground. So, they bring with them all the food they need to survive stored in the blubber that insulates and supports their massive frames. If they carefully plan and execute a sustained feeding ritual throughout the summer months in the feeding grounds off Alaska, a mother humpback will carry enough supplies to provide her newborn with 100 liters of milk every day, in addition to supporting her own energy needs. And if you have ever tried fending off a frisky humpback suitor, it takes a lot of energy. A humpback’s ability and aptitude to preserve, sustain, and coordinate its complex feeding and migration decisions, is nothing short of unbelievable and a strong indication of higher order thinking, planning, and intelligence.

There they go again stealing the spotlight. It’s easy to do, with all that leaping and splashing around! It’s worth remembering that humpbacks and humans aren’t the only warm-blooded cousins we have living among us. Eighteen species of odontocetes (toothed whales) and seven species of Mysticeti (baleen whales) have been documented in Hawaiian waters. But what do all those terms mean? It might help to know that dolphins and whales are both members of the same family—Cetacean. Baleen whales don’t have teeth, but rather large filamentous plates called baleen that filter-feed great volumes of water that they force out through their enormous mouths. These include species like humpbacks and fin whales, and they are generally the much larger members of the Cetacean family. The odontocetes or “toothed whales” include all the dolphins and porpoises. So really a dolphin is just a toothed whale with a cooler sounding name and smaller body frame. The most common species of toothed whales (dolphins) found in Hawai‘i are the spinner, bottlenose and spotted. 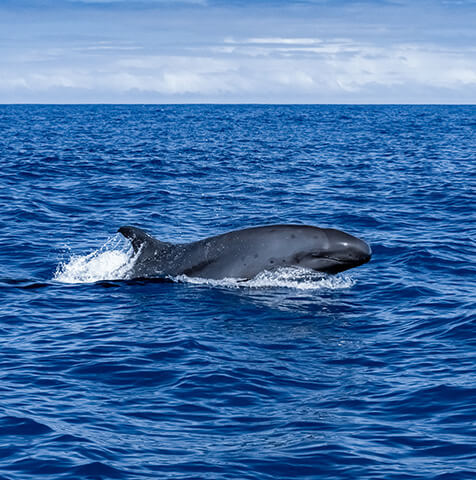 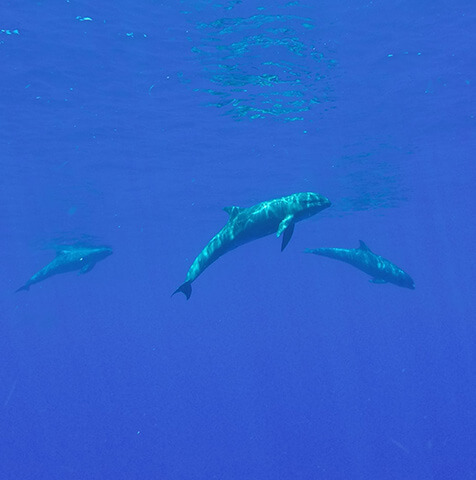 “Starting around November and lasting until April, the Pacific humpbacks leave their summer feeding grounds in the cold nutrient rich waters off Alaska. Their journey is one of the great migration routes of any creature to have lived on this small blue planet.”

But let’s focus on what most of us think about when we think whale—the larger more charismatic megafauna that live mostly hidden in Hawaiian waters, such as the false killer whales, melon-headed whales, pygmy killer whales, and short-finned pilot whales. Out of all of these, the short-finned pilot whales, generally referred to as just “pilot whales” here in Hawai‘i, are the most likely to be seen. Although they are found in all the world’s oceans, year-round they can be found off Maui and often the Big Island. Their large odd-shaped bulbous heads help to identify them, as well as their strongly curved, broad-based dorsal fins. These whales were made semi-famous in 2012 through a viral video off the Big Island of a female swimmer being dragged fairly deep underwater in apparent play behavior. She and the whale parted ways, both intact, but perhaps on less friendly terms, emphasizing that these whales should always be given space and respect.

False killer whales, although not common, are among the more likely of other whales also seen. And by not common, it is estimated that only 200, or so, individual whales live in these waters. Which, like many of the whale species we mention in this article, face serious threats of endangerment or extinction from their human family. NOAA recently (2018) established critical habitat protection for these species under the Endangered Species Act (ESA) as upwards of 90% of these whale are seriously injured by human activity annually. These 15-foot toothed whales (dolphins) bear little resemblance to killer whales, but they both share similar skull features, particularly large rows of conical teeth, so scientists lump them together. Like killers, they are very predatory and have been seen utilizing cooperative feeding behaviors. Like most whales and humans, they are highly sociable and are generally found in pods of 10-40 whales and can potentially be seen throughout all the main Hawaiian Islands.

Melon-headed whales look much like they sound: a large swimming beast with a melon for a head. Not only are they unique but also less likely to be seen of the “commonly spotted” whales in Hawai‘i, mainly because they feed in deeper waters, although a resident population is found along the Kohala coast. Population estimates are a little better for these sea-going mammalian melons, around 3,000 individuals. Their presence in deeper waters may explain some repeated mass-stranding events in recent years potentially linked to active sonar from deep-sea military vessels. At six to eight feet long, they are among the smaller whales, but their unique head and fondness for living in pods from 100 to 1,000 members strong, often including other whale species, makes for an unforgettable encounter if one should be lucky enough to see them.

Even more reclusive are the pygmy killer whales. They are one of the least known and least encountered whales in the world. Through the efforts of one researcher, Dan McSweeney of the Wild Whale Research Foundation, we know more about the year-round Hawaiian pygmy killer whales than any other pods around the world. Still, that doesn’t amount to much information, only making these whales that much more interesting and mysterious. Like so much of this blue planet, there are depths of knowledge surrounding us that we have yet to unravel, a sentiment embodied in the pygmy killer whales.

Of course, many people think of killer whales when they visualize other popular well-known whales; and they would be right to assume that here in Hawai‘i we also see them occasionally. The populations that visit these islands are considered “roving” as opposed to “resident” orcas, such as those found off the mainland’s West Coast; and they are one of the least understood or identified groups of orca throughout the Pacific. The transient roving populations of killer whales feed both on fish and other mammals, such as whales. Their name originated from sailors who would watch them organize and systematically attack larger whales (often calves, and old or injured whales), and so they dubbed them “whale killers.” These coordinated hunters are one of the major threats for Humpback mothers ferrying their young across the great Pacific migration they must undergo to reach Hawai‘i each year.

Like many of the whales around the Hawaiian Islands, you stand a much better chance of seeing certain whales from different islands, even from different coastlines of each island. For instance, Cuvier’s beaked whales, a curious smaller whale resembling a bottlenose dolphin, is not likely to be seen anywhere except the Big Island. While dwarf sperm whales can generally only be seen from the Lāna‘i and Kona coastlines. However, most whales, regardless of where or if you can see them, share a sacred, critical role in the ecosystems around the islands. Hence, their health is our health, and vice-versa. We share so many of the same behaviors, priorities, and dare I say “thoughts.” They nurse their young just as we do, sharing babysitting duties between mothers and even older males. They constantly communicate with one another, through a complex, organized sonic language that sounds like squeaks, whistles, clicks, and squeals to us. But doesn’t any language we don’t understand sound just as strange and unintelligible?

Although to some they may appear to be just really big fish (an exception being the sometimes-seen whale shark which is actually a really big fish, not a mammal), there is ample evidence to suggest that the nai‘a (dolphins) and koholā (whales) are second in intelligence and brain size only to humans. They exhibit recordable memory, self-reflection, mathematical aptitude, and outward self-conscious personalities. And above all, they plainly express the “emotions” of suffering the loss of a family member or the instinct to care for each other. As many of our mammalian sea-going neighbors are under serious threat, does it not seem to be the “human” thing to do, to care just a little more for them. I hope you can see and be inspired by one of Hawai‘i’s meeker or mightier whales, as living among the depths of these mysterious and diverse whales is a weighty privilege and unique responsibility.