While more than a century has passed since the golden era of Waikīkī’s iconic beach boys, the aloha and ocean skills they graciously shared with visitors—albeit while pocketing generous tips and winning more than a few wāhine (girls') hearts—has endured through the decades, passed from one generation to the next.

The embodiment of charm and a sun-kissed, fun-filled, stress-free lifestyle, Waikīkī beach boys conjured visions of tropical bliss played out daily on white sand beaches with turquoise seas and gently lapping waves. These dreamy images captured the imaginations of thousands worldwide beginning in the 1920s, a period that marked the opening of the first beachfront luxury resorts that remain today as the beloved “Grand Dames” among Waikīkī hotels—the Moana Surfrider and Royal Hawaiian Hotels.

Best known and revered among the original beach boys was Duke Kahanamoku, the five-time Olympic swimming medalist (winning 3 gold and 2 silver) who introduced surfing to the world during his international travels. Highly skilled, professional and welcoming to all, Duke was eventually dubbed the islands’ Ambassador of Aloha.

Today, legions of women and men throughout Hawai‘i ensure his legacy endures, embracing his values while pursuing the highest level of local marine knowledge, water sports skills and sharing them with others. Now, widely known as stewards of the ocean or masters of the waves, they are forever at heart beach boys.

On Hawai‘i Island, you’ll find them beachfront at all the major resorts and on lifeguard stands at the island’s public beach parks. A few of these watermen agreed to brush off the sand and salt temporarily to talk story with us.

Lead Alaka‘i Nalu (master of the waves) Daniel Perez has called Hualālai Resort home for 24 years. A native Big Islander, Perez traces his history back four generations to a great grandfather and great uncle of Spanish descent who jumped ship and swam to shore on the island’s northeast side. Once here, they never left! Besides his Spanish seafaring ancestors, Perez has native Hawaiian roots on both his mother’s and father’s side.

“I was pretty much born to this role, it’s part of my culture. I grew up at the beach, in the ocean with my family and lots of aunties and uncles. I’m deeply connected to this place; sharing it with others is a privilege,” Perez says.

Today, Perez is not only a veteran waterman, but a licensed boat captain. He routinely takes Hualālai members and Four Seasons hotel guests on adventure tours along the Kona/Kohala Coast aboard the property’s 30-foot Ribcraft “Maka‘ala.” The tours are especially popular during winter Humpback whale season and Perez shares an especially memorable encounter experienced early this year.

“We had a boat full of visitors who weren’t regular ocean-goers—in fact, they were professional golfers—when two whales swam around the Ribcraft at close range. It was a mother and her newborn calf. The calf alternately swam free and then would return to mom holding tightly to her back.

“They were absolutely blown away—amazed at what they were seeing. I couldn’t resist saying, ‘This is one of the many things that make this special place much more than just golf,’” Perez says. Introducing “newbies” to the ocean and all its critters, whether aboard the Ribcraft, stand-up or outrigger canoe paddling, Perez says, is one of the most exciting and satisfying parts of the job. 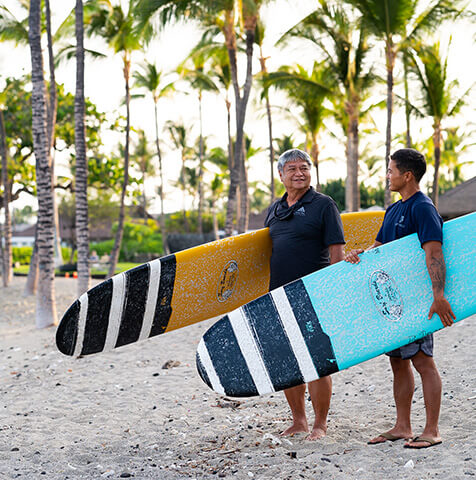 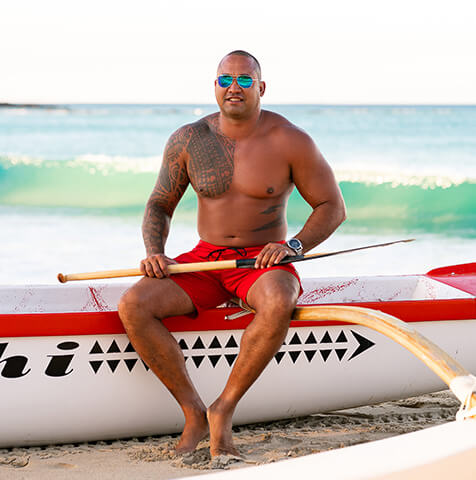 ““I grew up at the beach—swimming, diving, and surfing. I just fell in love with the ocean. It actually chose this career for me.”

A native of Hilo, Tyson Yoshizumi moved to Puakō (just a few miles south of Mauna Kea Resort) with his family at age 5. For the past 18 years, he’s literally been working in his childhood home’s front yard as a waterman at Mauna Kea Beach Hotel.

“I grew up at the beach—swimming, diving, and surfing. I just fell in love with the ocean. It actually chose this career for me. Of course, as a kid, I’d read about beach boy legends such as Eddie Akau on O‘ahu’s North Shore and Buffalo Keaulana at Waikīkī, and I’d try to emulate them,” Yoshizumii says.

One of his greatest joys is taking visitors—some who don’t even swim—out on outrigger canoes, catching waves for their first time and seeing how grateful and amazed they are. “The ocean is beautiful and healing. With their recognition of that, I’ve had guests break down in tears from the experience,” he says.

On the flip side, performing water rescues, recognizing potentially dangerous ocean conditions and communicating them is a huge responsibility that he and his colleagues take seriously. Posting colored flags that indicate conditions every morning and updating as needed throughout the day is just part of it. Rotating watches on the lifeguard stand and getting qualified for safe operation of jet skis with their towed, life-saving sleds are prerequisites to clinching a beach boy position at the hotel. In addition, all watermen and women must attain certifications in first aid, CPR, Red Cross lifeguard and first responder, he says.

“Over the years I’ve seen many come and go. It’s a lifestyle not suited to everyone—there are long days in the hot sun, in the water and at times in potentially dangerous, life-threatening situations.

For me, it’s easy; it’s what I love to do on and off the job,” Yoshizumi says.

Affectionately known as the “Turtle Guy,” O‘ahu native Pi‘i Laeha straddles the “then and now” of Hawai‘i’s beach boy culture. Today, as natural resource manager at Mauna Lani, Auberge Resorts Collection on the Kohala Coast, Laeha is charged with care of the property’s ancient fish ponds and the Malama Honu green turtle program. Through this program, turtle hatchlings are raised until they are an appropriate size to be released into the ocean.

His love affair with all things ocean, however, started more than 50 years ago when he was bodyboarding on O‘ahu beaches every chance he got. “After graduating high school in 1974, my friends and I would catch the bus to Waikīkī to surf. Only problem was, at that time, buses didn’t have racks, so we couldn’t take our boards,” he says. Working out a deal with the Waikīkī beach boys, Laeha and friends would help clear the beach of litter in exchange for one hour surfing on the beach boys’ boards. Aside from loaning boards, some of these long-time beach boys—among them Ted Bush, the youngest ever to be 1st Canoe Captain, and Duke Kuahulu, the first steersman on the traditional voyaging canoe, Hōkūlea—would share their skills and impart their values.

“Ted always said, work first and play later. And there was a code they all abided by: don’t lie and don’t steal,” Leaha says. “They would also watch us to gauge our potential—our skills, of course, but also how we related to and talked with people.”

“One day, I was invited to be one of two crewmen on an outrigger canoe excursion for tourists. Afterwards I was given a $2 tip and I thought, ‘Good God, I can make money doing what I love,” he says.

Ultimately, Laeha spent some 15 years on Waikīkī Beach prior to moving to Hawai‘i Island in the late 1980s. “At the time, I heard the Fairmont Orchid was looking to hire beach boys. The interviewing manager asked why I wanted to be an Orchid beach boy and I respectfully responded, ‘I don’t want to become a beach boy. I am a beach boy,’” he says.

Beyond the obvious ocean skills and knowledge, what exactly is a beach boy according to Leaha? “It’s a lifestyle, not just a job. In essence, beach boys are ambassadors of aloha with lots of storytelling, playing music, just being welcoming and nice to people—you can’t beat it! And it helps if you have just a bit of kolohe (rascal) in you!”

While he may have grown up in upcountry Waimea, Bullet Obra’s heart and soul are firmly planted in the sand. Today that translates to the Surf Shack on the beach at Mauna Lani, Auberge Resorts Collection where he serves as director of operations for outdoor adventures. Most of those adventures, he’s quick to point out, are based on or in the ocean.

“I started at Mauna Lani beach right out of high school in 2008, working with the hotel contractor Hulakai. Eventually the hotel took operations in-house, and I continued with them, offering stand up and canoe paddling activities,” he says. His role has grown over the years, and Obra now manages a team of 10 fellow watermen.

His love of all-things-ocean began at age three surfing with his father. By age six, he was winning tournaments in the 12 and underage group in Hawai‘i; and at age 10, he was the finalist at nationals in San Clemente, California. “Needless to say, surfing has always been a big part of my life. That fact coupled with growing up admiring the old-time Waikīkī beach boys inspired my choice to walk in their footsteps,” Obra says. “We’re here to share what we love and what we are most passionate about, while making sure people are safe.”

He says 90% of the hotel guests have never been in the ocean, or if so, just a very few times. “Seeing their excitement enjoying our ocean activities is actually what keeps me excited every day. It’s such a great reminder of how lucky we are to be living this beach boy life.”